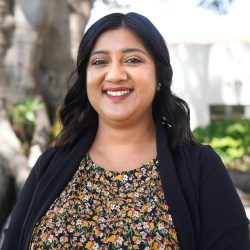 Victoria Cruz-Rojo was born and raised in Los Angeles. After graduating from high school, she moved to San Diego’s North County and attended California State University San Marcos for her undergraduate studies. She graduated with a double major in History and Spanish. After a career in the finance industry, she felt called to a profession that would make more of a positive impact on the world. She went back to school for a Masters in Education and preliminary teaching credential from National University.

As a native Spanish speaker, the Spanish language holds a special place in Victoria’s heart. She loves being able to teach students a subject that is near and dear to her heart as the language of her family and ancestors. Victoria feels that the cultures and traditions of the Latin American community are beautiful, and she is thrilled to be able to share them with her students.

It has been nearly 10 years since she moved south to San Diego and she never plans on returning to Los Angeles, although she remains a tireless Dodgers fan. During her free time, she likes going to the beach and hiking with her fiancée. She is a huge Disney fan and loves Marvel, Star Wars, and Pixar films.