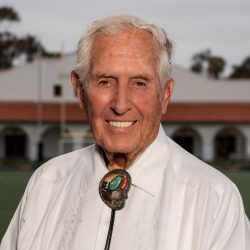 SENATOR DAVID G. KELLEY is a graduate of the Army and Navy Academy Class of 1947. He attended California State Polytechnic University, San Luis Obispo, majoring in citrus fruit production. His education was interrupted by service as a pilot in the U.S. Air Force during the Korean conflict. Senator Kelley has been a successful citrus rancher in the Hemet, Calif., area for more than 40 years. Active in the Riverside County Farm Bureau since 1955, he has served as both president and vice president, as well as on the board of directors of the California Farm Bureau Federation. Mr. Kelley was elected to the California state Assembly in 2000 to represent the 80th Assembly District. Before that, he served eight years in the California state Senate. Prior to term limits, he served 14 years in the Assembly, where he was first elected in 1978. He has served as director of the Hemet-San Jacinto Basin Resource Conservation District and president of the Century Club of Riverside County. He belongs to the Hemet-San Jacinto Noon Exchange Club, the Lincoln Clubs of Coachella Valley and Riverside County, the Western Growers Association, and the Farm Bureau. He is also a member of Chancellor’s Agricultural Advisory Committee, University of California-Redlands; board of directors of the Hemet Hospital Foundation; and board of directors, executive committee of the Museum of Anthropology and Paleontology in Hemet.