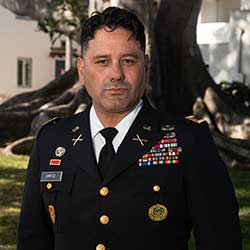 CW4 Manny Ortiz, USA Ret. is a native of California. Born in San Fernando and raised in Sylmar, CA. In 1988 at the young age of 18 years old he enlisted into our beloved U.S. Army. His first duty assignment was in Nuremberg Germany. He was assigned to an Artillery Unit. Upon his return from overseas he was then assigned to Ft. Sill Oklahoma. While in Oklahoma, he was selected to be a Drill Sergeant where he trained young men to become Soldiers. In 1995, he was selected to become a U.S. Army Warrant Officer.  For the next 18 years, he served as a Target Acquisition Warrant Officer. He was promoted from W1-CW4. After serving 25 years in the Army he retired in 2013.

Chief Ortiz (USA, Ret) came on board as the JROTC LET3 Instructor at the Army and Navy Academy 2017. His new passion is to teach cadets on how to become better citizens as they continue their higher education and embark on their life as an adult. Chief Ortiz holds a B.A. in Justice Administration from Hawaii Pacific University. He has attended numerous military schools from Drill Sergeant School, Warrant Officer Candidate, Warrant Officer Basic Course, Warrant Officer Advance Course and Warrant Officer Senior Staff Course. He was certified to teach JROTC by the U.S. Army in 2013.