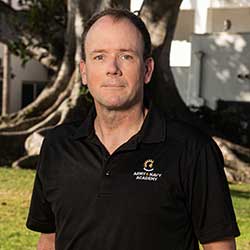 Sgt. Jason MacDonnell is the Band Company TAC Officer. He was born and raised in Boston, Massachusetts. After high school, he attended the University of Maine and later joined the United States Marine Corps where he spent five years on active duty. Subsequent to that, he worked with the Department of Fish and Game and California Conservation Corps and earned many certifications. Sgt. MacDonnell joined the Commandant’s staff at the Academy in 2003. He is an avid cyclist, outdoorsman, and chess player.