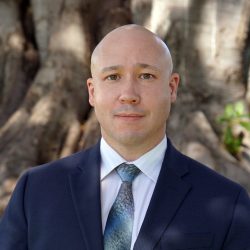 Chris Thaeler is a proud Army and Navy Academy Alumnus who has fond memories of his six years as a cadet. A “Lifer” at the Academy, he was a performer in the Atkinson Warrior Band, a multi-sport athlete in Water Polo and Swim, and had the pleasure of serving on the Battalion Staff and Honor Council.

After graduating, he attended the United States Naval Academy in Annapolis, Maryland before returning to Southern California to build a career in information technology. He served as the Technology Director at Urban Street Angels, one of San Diego’s foremost charities assisting transition-age homeless youth, before returning to the Academy.

He served as the Director of Information Technology before becoming the Academy’s Dean of Admission. As the head of the Office of Admission, Chris is driven by a desire to see a new generation of students benefit from the extraordinary, game-changing opportunity that Army and Navy Academy embodies.