The ‘Secret’ to Educating Boys 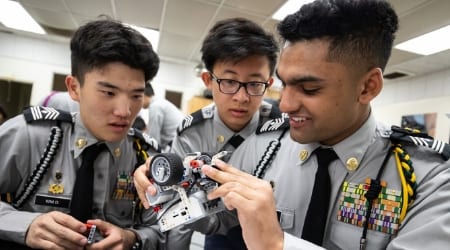 “Boys and Girls Learn Differently,” — title of book by Michael Gurian, founder of the Gurian Institute.

While there have been all-boys and all-girls schools in place for centuries, it’s only been in recent years that scientific research has shown why such schools are the better option in many cases for educating young people. What’s been considered “old-fashioned” and even counter to today’s notion of gender equity is experiencing greater attention these days as schools, both public and private, look for better way to shape young people – in our case, boys – into successful adults.

It was cultural and social norms – not scientific findings – that had been the rationale for all-boys schools in decades past. Military academies, such as the Army and Navy Academy (hereafter referred as “Academy”), a college preparatory boarding school for boys in Carlsbad, Calif., have known intuitively and from first-hand experience that middle- and high school-age boys thrive in a single-gender, military-oriented setting where the moral concepts of duty, loyalty, compassion, honor, integrity, courage, respect, and gratitude are important parts of a boy’s education.

But the value of a single-gender learning environment for boys goes far beyond character development. Recent studies show that boys are failing in the standard co-educational school systems. In such settings, boys typically get lower grades than girls; they are more likely to be suspended or expelled; more likely to be prescribed ADHD medication and be placed in special education programs.

In recent years, scientists who study how children learn as well as the physical structure of the human brain have learned why there’s the need for different learning environments and methodologies for boys and girls  Their conclusion is based on one primary finding: Boys learn differently than girls, based on their biology.

A few reasons why boys learn differently than girls.
Author and social philosopher Michael Gurian operates a Spokane, Wash.-based institute bearing his name that trains educators, counselors, parents, and other child advocate agencies on teaching practices that optimize learning for each gender. Schools that underwent intensive training included the Academy which was designated a leader in single-gender education as a Gurian Institute Model School in 2015.

Gurian’s research, as well as that of others, has identified several behavioral traits of how boys learn differently than girls, including the following:

Some benefits and results of an all-boys learning environment

A three-year study by Stetson University of the effects of gender-tailored curricula was tested several years ago in a Florida public school where a group of fourth-grade boys was divided into two cohorts – one co-educational, the other all boys. The same number of students in each class covered the same curriculum. At the end of the study, the boys in the all-boys group produced dramatically higher proficiency scores in reading, science, math, and writing on what  was then the Florida Comprehensive Assessment Test (FCAT) than the boys in the co-educational class – 86 percent compared to 37 percent respectively.

A similar study also several years ago in Washington state reported that a cohort of boys who were moved into a single-gender educational setting moved soared from 10 and 30 percent performance rankings they had achieved in co-educational classes on the former Washington Assessment of Student Learning up to 73 percent in an all-boys class.

How to help boys learn to become successful in school
So, how can schools teach boys effectively?  Gurian listed several essential strategies in an article published by the Association for Supervision and Curriculum Development a few years ago.  What follows are few strategies teachers can use in teaching boys:

Understanding the differences between how boys learn differently than girls and doing something about in the school classroom is critical to better preparing today’s teen-age sons to become successful adults in tomorrow’s world.