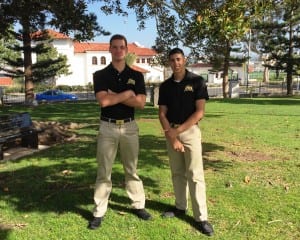 When Oscar Lama ’15 decided to start the Anti-Bullying Club at ANA, he had no idea that its impact would spread all across San Diego County.

It all began in the summer of 2014, when Lama came up with the idea for a student-led Anti-Bullying Club after reading about General Douglas MacArthur’s efforts at West Point. He reached out to his friend Nicholas Raheja ’15, and asked if he’d be interested in leading the club with him. Raheja said yes, and it didn’t take long for the club to grow in numbers and start meeting regularly.

Their goal was to spread their message that it’s cool to be kind, first through the Corps of Cadets, then to the greater community. Their largest effort this year was in organizing Kindness Week from February 9–15. During this time, Cadets were given “missions” each day, which encouraged them to carry out random acts of kindness for deserving students.

Lama reached out to U-T San Diego reporter, Pam Kragen, to ask for her help in spreading the word. She came to campus to meet with him and Raheja to write their story. Her story was a hit as soon as it was published, seen by teachers, school administrators, and politicians who wanted to Cadets to visit their schools to spread their message, “it’s cool to be kind.”

Their goals of expanding into the community were becoming a reality. Soon, the club received a call from the Principal of the Discovery Charter School in Chula Vista, who had read the article and wanted them to visit her campus. The Cadets accepted the invitation, and gave a presentation to the entire student body to teach them ways to prevent bullying. It was incredibly well-received.

Bonnie Dumanis, San Diego County District Attorney, also read the article and was impressed by Lama and Raheja’s initiative and drive. She extended a personal invitation to them to her annual “Citizens of Courage” event, where they were recognized for all of their efforts to prevent one of the most pervasive crimes of our time – bullying.

The club continues to spread its message, reminding people of the huge impact a single act of kindness can have throughout the entire community. They have proven that it truly is cool to be kind.