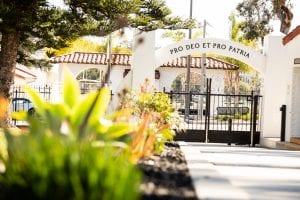 “This is a wonderful place for boys to learn leadership, responsibility, character and the many skills needed to become engaged, purposeful, and contributing citizens… ANA is providing my son opportunities to be the best he can be and as an ANA parent, I could not be more pleased with our experience.” — Pamela R. (ANA parent)

While parents and their students are wondering if or when their public-school campuses will reopen, one school continues to offer the quality boy-centered education and leadership training it has provided for 110 years.

The Army and Navy Academy, a college preparatory boarding school for middle- and high-school boys, located on an oceanfront campus in Carlsbad, Calif. is exercising its flexibility as a private school to avoid the “one-size-fits-all” campus closure policies, the lack of quality teaching and learning resources, and other constraints public schools are facing. Instead, the Academy is free to set its own starting date and to center its attention solely on the boy through robust academic, leadership and character development programs and extra-curricular activities. All designed to help each cadet to “Be Bold. Be Brilliant. Be You.”

The school’s unique belief in the boy is attracting attention from an expanding group of parents.  Director of Admission Darrin Knox said his staff has been receiving more inquiries in recent weeks from parents who are frustrated with the lackluster education their boys are receiving in public middle and high schools.

“They tell us the distant learning programs at their sons’ public high schools have diluted even further the quality of education they want for their sons,” Knox said. “Their sons are not being challenged academically or otherwise. They’re looking for a school where their sons can learn to excel.”

What public schools are facing
The onset of the COVID-19 pandemic this spring was not the first or only occasion parents have expressed concern about the education their sons are receiving in public middle and high schools.  A Public School Review study last year outlined the 10 major challenges that most public schools facing, including the top three:

What parents want in a private school as an alternative to public schools
A study conducted for the Friedman Foundation for Educational Choice (now known as EdChoice) asked several hundred low- and middle-income couples, single parents, African Americans, and parents with less than a college education to rank the reasons for wanting their children to attend a private school. They listed the following conditions:

The Army and Navy Academy offers these characteristics — and more
The first question a parent typically asks is: Why should I send my son to a military academy? An article, “Why Send Your Son to a Military Boarding School?” on the MilitarySchoolUSA website said a military environment is designed to shape young men into leaders and build their character. Some of the ways these schools shape cadets’ lives fall into three main categories:

Yet another reason the Academy believes in the boy.

In short, boys learn differently than girls. In recent years, scientists who study how children learn as well as the physical structure of the human brain have learned there’s the need for specialized learning environments and methodologies to optimize learning for each gender.

Author and social philosopher Michael Gurian heads an Arizona-based institute bearing his name that trains educators, including Army and Navy Academy teachers and administrators, on teaching practices that optimize learning for each gender. The Academy is among a handful of schools nationwide to earn the Gurian Model School certification.

In his book, “The Wonder of Boys: What Parents, Mentors and Educators Can Do to Shape Boys into Exceptional Men,” Gurian wrote: “Boys must find ways to compete and see themselves as performing well. If they do not … they’ll compete against society itself, abusing their community and themselves.”

Which explains in part the Academy’s belief in the boy.

“Our core belief is that greatness lies in every boy; however, for boys to succeed, they must first believe in themselves,” said retired Army Maj. Gen. Arthur Bartell, the Academy’s president. “In addition to a rigorous academic program, we teach our cadets to aim high, set goals, and take action in order to become independent as well as leaders in all that they do.”

The results …
In the Academy’s 2019-20 school year, nearly 300 boys from 15 states and 18 countries received what the school has offered since its founding in 1910– a rigorous academic education that focuses on how boys learn while developing the Academy values of honor, respect, responsibility, compassion, and gratitude.

As a result, virtually all Army and Navy Academy graduates in past years have gone onto colleges and universities, including — but not limited to — several University of California campuses, MIT, Johns Hopkins University, Purdue University, all five service academies, NYU, Boston College, Embry Riddle Aeronautical University, University of Southern California, Boston University, Texas A&M, and Rochester Institute of Technology, and the Universities of Oregon, Washington, and Colorado. The alumni range from teachers, leaders in the professions, political and civic leaders, successful businessmen as well as military officers, including an Army four-star General.

“We work to instill in every boy the belief that he can achieve or exceed any goal he sets for himself, “ Bartell said. “We’re looking for success-oriented boys to follow our tagline: “Be Bold. Be Brilliant. Be You.”