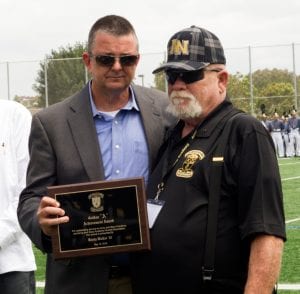 Rusty Walker ’67 attended ANA for six years and during his senior year he became a company commander when Major Bruce recognized his innate leadership ability and determined that he was a valuable liaison between Cadets and staff.

After graduating from ANA he started a successful Roto-Router business in Vista. Rusty maintained the highest regard for both Major Stoll and Colonel Atkinson, hosting an annual steak dinner at his home during Alumni Weekend. Although these dinners raised countless funds for the eventual building of Atkinson Hall, his support for the Academy was carried out with anonymity and little fanfare.

Rusty served as the Vice President of the Alumni Association in 1988, where he played an integral role in the transition of the ANA Board of Directors to ensure that the newly comprised Board continued to carry out the mission of the school. In the early 90’s, he spent his summers working on the campus and completing major repairs to ensure that the Cadets would have quality living quarters.

Rusty is a man of action and few words. His refreshing candor is surpassed only by his commitment to help further the goals of the Academy and the future of the Alumni Association.