Since Army and Navy Academy’s founding in 1910, our Cadets have felt loyalty to our nation’s institutions of military leadership and training. From our country’s various service academies, we take pride in inculcating their values, traditions, and sense of duty to one’s community and nation.

Tradition plays an important part in our Cadets’ experience and accomplishments. 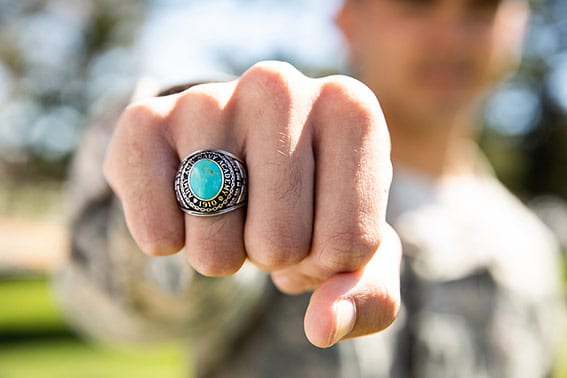 There is no more emblematic symbol of a school’s history than its Senior Class Ring, proudly worn by students and alumni in the United States to commemorate their attendance and graduation.

The tradition of the class ring originated with the U.S. Military Academy (West Point) Class of 1835. At Army and Navy Academy, the Senior Class Ring represents the accomplishment of the wearer and symbolizes a lifetime bond to the Academy.

The manner in which the ring is received, presented, and worn is all part of the historic transformation of the wearer from a young man to Alumnus of one of the finest college preparatory schools in this nation. 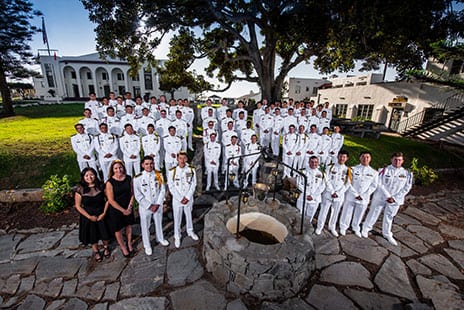 The most coveted possession of the First Class (Senior Class) is the Lawn which is adjacent to the Rose Garden. This location was part of the Red Apple Inn which, in 1936, became the Davis Military Academy. This was the short-lived name of the school during the transition period when the school moved from the San Diego campus.

As the school settled into this new facility in Carlsbad, the Senior Class took over the area next to the Inn which had become the main building on campus. The Class of 1937 started the tradition of exercising control over this area of the campus. It soon became known as the Senior Garden. As it was reported by an alumnus of that era, this area first taken over by the seniors included the gate, the small garden, and the wishing well. The tradition required that only Seniors and their guests were allowed in this area of the campus.

In 1976, records show that exclusive use of the north lawn became a formal senior tradition. The Class of 1976 had a molded concrete plaque which was presented to the Academy and this lawn became known as the “Senior Lawn.” The Class of 1996 established a standard procedure to protect and to perpetuate the customs of the Senior Lawn from one First Class to the next at year’s end during the school’s commencement.

The oldest known tradition and privilege of the First Class (Senior Class) is the dedication of the annual yearbook. The oldest yearbook of record is The Cadet of 1914. The inscription in that yearbook reads “The Class of 1914 dedicates this book to their friend and advisor, Dr. N.A.N. Cleven.” Based on this inscription and the long history of the yearbook, dedications shall be a privilege of the First Class.

Later the yearbook became known as the Adjutant. The procedures for nomination of a person to be honored for this distinction shall be determined by the members of the First Class each year.

The overseer of the history, traditions, and customs of the Army and Navy Academy is the School President.

2012 Ground is broken to begin construction of the Duffield Sports Center.

2013 The Duffield Sports Center opens. It is a state-of-the-art athletic facility that is home to a basketball court, wrestling room, weight rooms, home and visiting team locker rooms, a concession stand, and additional office, academic, and meeting areas. It features an outdoor stadium with fixed seating, a two-story press box, VIP box seats, and an NFL-quality turf field.

2014 Major General Arthur Bartell is named President of the Academy.

2019 Army and Navy Academy went through a major rebranding and unveiled a new logo!

The Academy completed the refurbishment of the new Operations Office.

Ground is broken to begin construction of the Student Enrichment Center.

2002 Brigadier General Stephen Bliss is named President of the Academy.

2003 ~ A dormitory building was damaged and needed to be replaced. A new multi-story student housing unit is built. The new facility is named in honor of Mr. & Mrs. A.C. Anderson whose kindness ensured that ANA would have needed resources to continue providing an unique environment for educating young gentlemen of good character.

2003 ~ An old student housing unit, on south side of campus, was converted into needed office spaces for the Military (JROTC) Department. This building was re-dedicated in honor and memory of Lieutenant Colonel Steve Miller who started his career with the Academy as the Senior Military Instructor in 1992.

2005 ~ The southwest corner ANA of the athletic field was selected to become the Home of the North County Viet Nam Veteran’s Memorial. This Memorial honors all known Veterans of North San Diego County who gave their last full measure to a grateful nation during this conflict. Also listed on this Memorial are ANA Alumni who died during the events of the Viet Nam War.

1994 ~ The Atkinson and Crean student housing facilities are completed and dedicated.

1994 ~ The school’s Athletic Field is named in honor of Coach John Maffucci for his long-time service to the school and its athletic programs. The City of Carlsbad further honors him by declaring October 28th, 1994 as “Coach John Maffucci Day”.

1980 ~ Colonel Gilbert Brookhart took over the Office of President. Two year later he passed away.

1983 ~ Colonel William Currier Atkinson passed away after fifty-nine years of dedicated and devoted service to the Army & Navy Academy community.

1985 ~ The Army and Navy Academy celebrates their Diamond Jubilee and seventy-five of service to continue, “Our mission is to educate and develop young men of good character”

1988 ~ “The salute to Colonel Atty”, a fundraising program, is started by the Alumni Association to build the Colonel William Atkinson Building.

1970 ~ An expansion was completed to the Commandant’s Office and named in honor of Lieutenant Gary Letson, USMC, ANA Class of 1963, who was killed in the action in the Republic of Viet Nam.

1971 ~ The Academy was named as an Honor Unit with Distinction by the Department of Army.

1972 ~ Colonel W.C. Atkinson retired from the Office of President. Two years later he returned to the office to oversee and manage the day to day operations of the school.

1960 ~ The Fitzgerald Science Hall was dedicated

1960 ~ The Administrative Building, built in 1939, was dedicated to the school founder Colonel Thomas Davis for his long devoted service to the Academy.

1961 ~ New dormitory built in honor of Roy S. McIntosh, a long-time Latin Teacher for the Academy.

1964 ~ The swimming pool facility, a project of the ANA Mother’s Club, was donated and dedicated to the school

1966 ~ A contract was signed with the Department of the Army to assign an active duty Officer as the Senior Army Instructor to oversee and manage the JROTC program.

1950 ~ Sadly, within six months Gertrude Anderson also passes. It is revealed that all school grounds and buildings are left to the Academy free of all indebtedness.

1950 ~ After forty years, the school has just over 200 cadets and continues its mission of “to educate and develop young men of good character”.

1957 ~ New dormitory built in honor of V. J. Dorman – Board of Director and Attorney

1958 ~ New dormitory built in honor of Roy Hoover, a retired banker and Board of Director

1958 ~ The Mother’s Club was formed on November 7th. Later to be known as the Army Navy Academy Patron’s Association (ANAPA)

1941 ~ Major John Davis, the second school President, leaves the school for another position at an East Coast military Academy.

1941 ~ On December 16th, the Academy dropped it’s for profit status as a private stock corporation and becomes a non-profit educational organization.

1942 ~ Major Samuel Warfield Peterson, who has served the Academy as Headmaster, is elevated as the fourth President.

1943 ~ San Diego was dropped from the official name of the school and it was now known as the “Army and Navy Academy”.

1943 ~ On the 26th of April, Major Samuel Warfield Peterson passed away after long service to the Academy since 1916.

1943 ~ Board of Directors appoints Major W.C. Atkinson as fifth School President. Mrs. Virginia Powell Atkinson was appointed as the first woman Vice-President of a Military School.

1943 ~ Negotiation of a sale agreement was started with Mr. and Mrs. A.C. Anderson. The Anderson transferred title to the school of all property and assets or $10,000.00 a year for twenty years.

1944 ~ The school starts a waiting list for students. A building program for additional student housing is started. Tents were placed on campus on a temporary basis during construction to accommodate student quarters.

1945 ~ Headmaster Charles Bain passed away after a long illness. Raymond Ede takes over as Headmaster.

1930 ~ The Academy marked the 20th Anniversary. Colonel Davis was making plans to double the school from 500 to 1000 students.

1931 ~ The National economic problems of the pending depression were starting to impact school operations with declining enrollment.

1933 ~ The Security Trust & Savings Bank, and other creditors, which hold to mortgage on the school, seized control of the management of the school.

1935 ~ The Academy starts its twenty-fifth year and should be celebrating their Silver Anniversary. In light of the poor economic situation no celebration is held.

1936 ~ The last graduation for the San Diego Army and Navy Academy is held at the Pacific Beach campus. Bank and creditors foreclose on the school seizing all property and holding of the school.

1936 ~ In Summer, Colonel Davis forms a stock company in which faculty and staff invests personal resources and creates a new school. Abandoned Red Apple Inn is rented in Carlsbad, California.

1938 ~ During Christmas Holiday Colonel Thomas Davis informs faculty and staff that he is resigning from the Academy to return to the Pacific Beach campus. He accepts a position as Vice-President and Director of Admission for the educational corporation that purchased the school assets.

1939 ~ Combination auditorium-gymnasium and seven 4-room cottages on built on campus.

1922 ~ The Academy added a Naval training program to school curriculum.

1922 ~ School founder Thomas Davis garnered a commission as Colonel from the National Guard of Kentucky.

1923 ~ A Lower School Division was established as a separate unit on campus. This division was for first grade to sixth grade.

1924 ~ The Academy joined the Association of Military Colleges and Schools of the United States.

1926 ~ The school added three new buildings, auditorium for drama department, classrooms for the lower school and an infirmary.

1926 ~ Captain Atkinson received praise and recognition in Southern California for participating in local parades and providing concerts in Balboa Park.

1927 ~ The school now had 500 registered students and started a gigantic building expansion program.

1927 ~ The City of Los Angeles invited the Cadet Battalion to take part in the dedication ceremony of the New City Hall.

1928 ~ The school added four new cadet barracks buildings and there were 64 building and cottages on campus to house 362 cadets.

1929 ~ The Junior College Division was founded. An additional 18 acres were purchased to accommodate the college program.

1910 ~ Captain Thomas A. Davis founded the San Diego Army and Navy Academy in the old Balboa Hotel in Pacific Beach with thirteen students.

1912 ~ The Academy has its first graduation with two students.

1913 ~ The first recognition and accreditation took place by University of California officials. 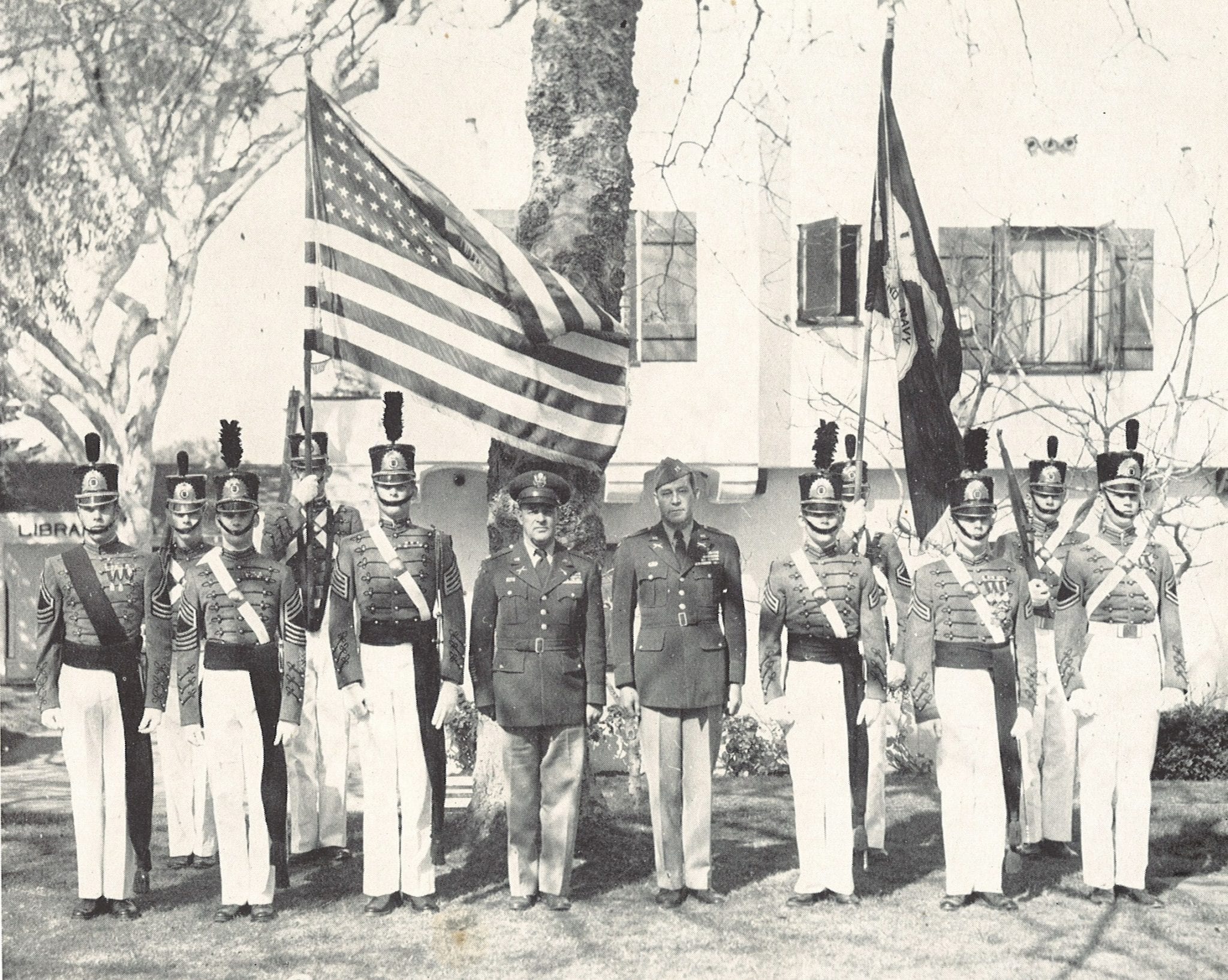 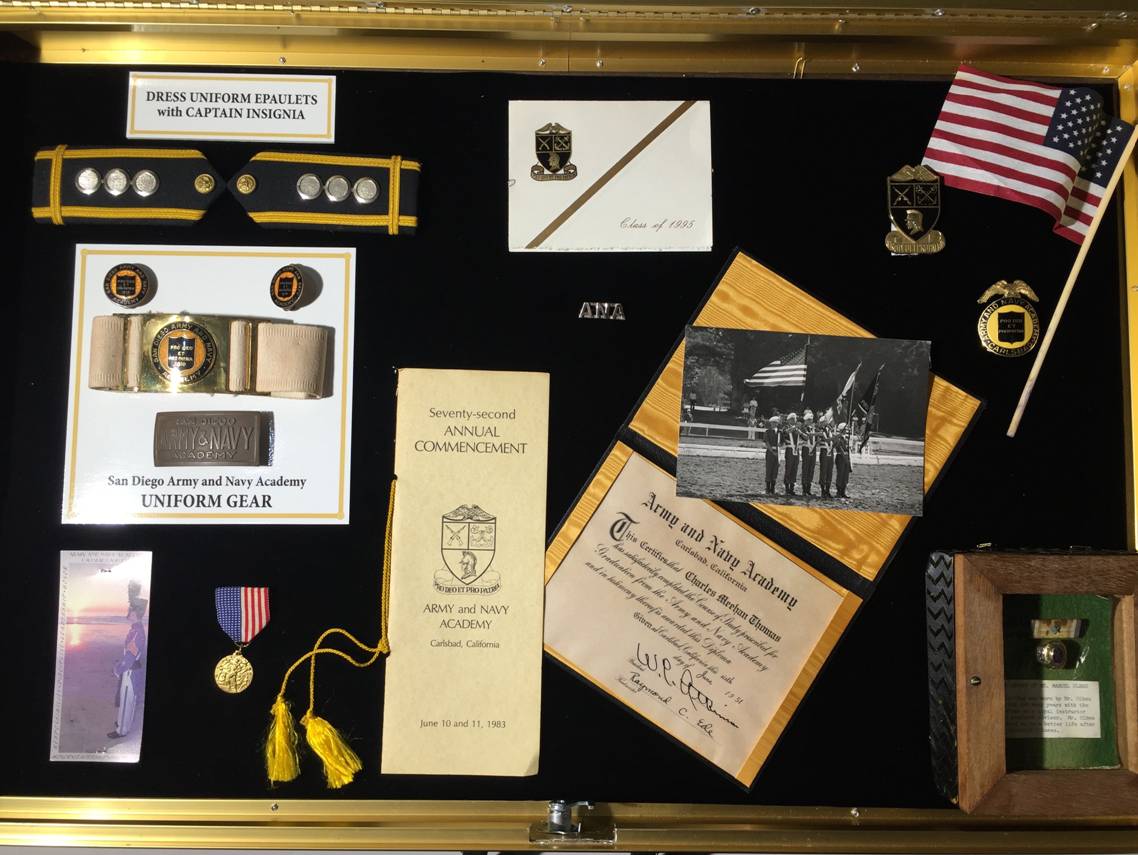 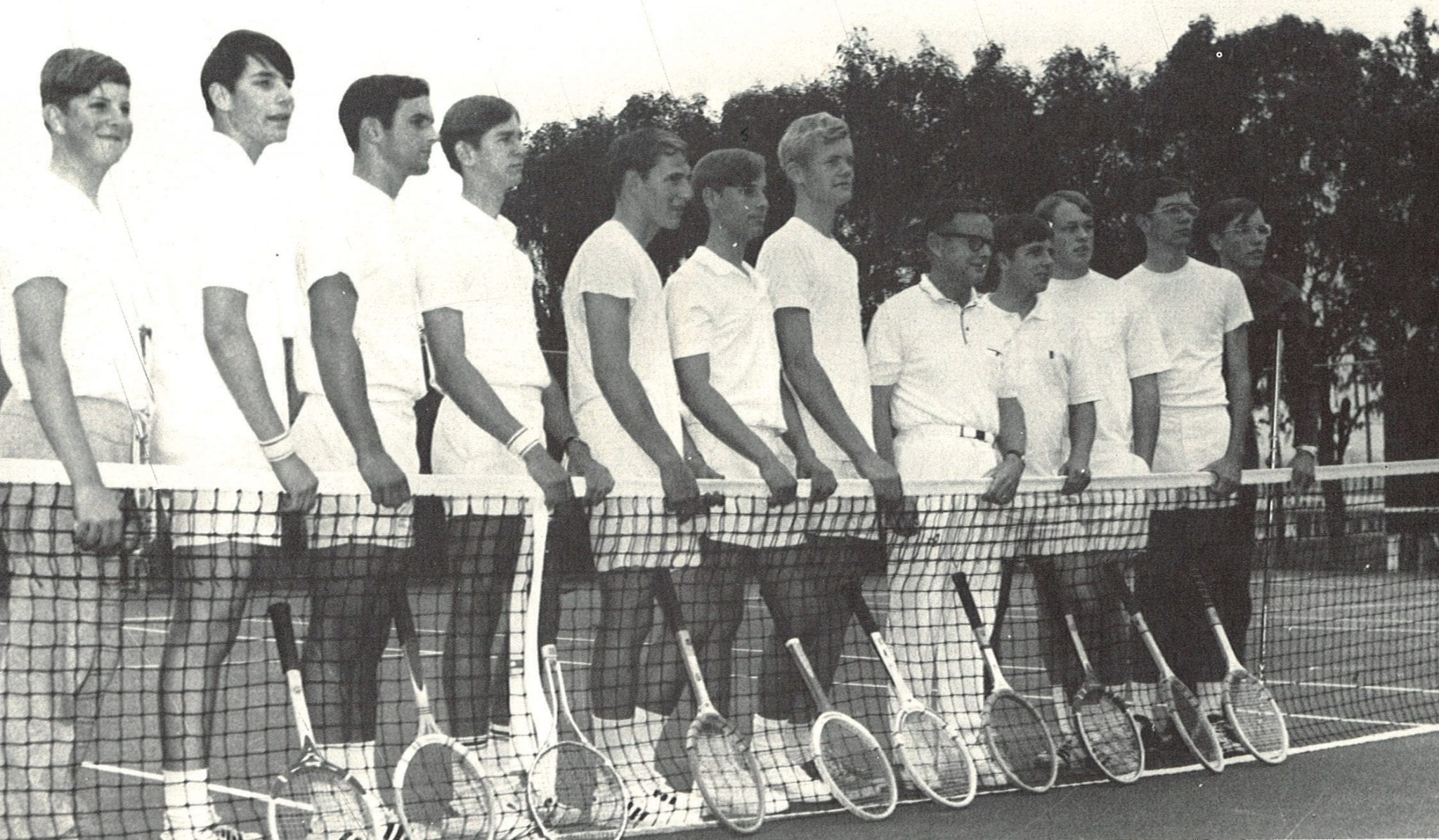 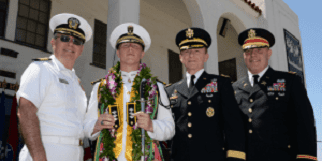 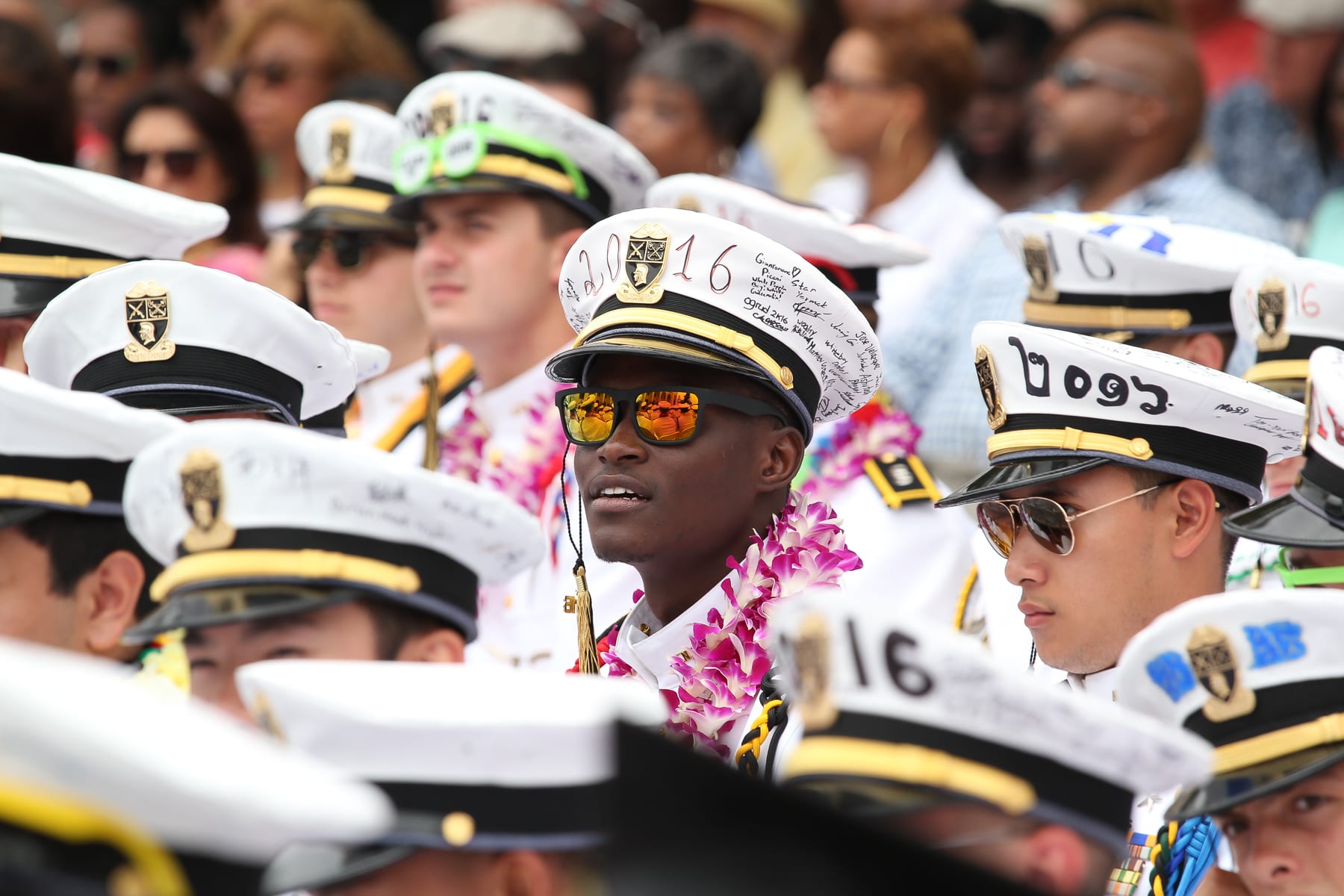 Many thanks to those who have assisted us in compiling the history over the years, with a special thank you to alumni Alexander Mui ’08, John Burden ’63, and to former parent Pete Zoschak. If you would like to help uncover more of the Academy’s history or if you can provide us with updated information, please contact us by email.

Join fellow Cadets, Alumni, Faculty, Staff, and Friends in piecing together the Academy’s rich legacy and traditions and as we work toward our future goals as outlined in our Strategic Plan: