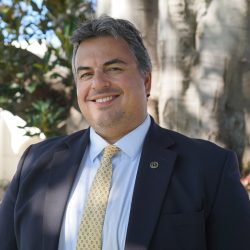 Born in Munich, Germany, Victor attended the American International School in Munich, Germany, and the American International School in Prague, Czech Republic before transferring to Army and Navy Academy as a Junior in high school. Serving on the Honor Council at the Academy, and as a member of the Cadet Battalion Staff, he graduated as a Cadet Captain. In addition, he received the Silver “A” Award and the James Bond Stockdale Award.

Upon graduation, he went on to pursue a Bachelor of Arts degree in Political Science from San Francisco State University. Proficient in five languages: English, German, French, Spanish and Bulgarian, Victor has a special understanding and appreciation for our international students, as well as our current expat Cadets whose parents currently reside abroad.

As a former Residential Life Officer for the Band Company, and a Cadet at this institution, Victor is well informed about the process that takes place from initial Cadet registration to graduation. As the Associate Director of Admission for all international students, as well domestic students that currently reside abroad, he is dedicated to helping parents and future Cadets benefit from this “once in a lifetime” opportunity. His motto is: “You only have one life; make the best out of it.”