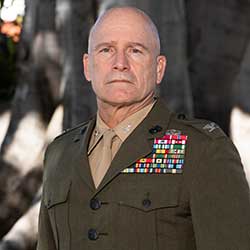 Colonel Wayne Ward, USMC Ret. came on board as the Commandant of Cadets at the Army and Navy Academy 2016. In that position he oversees and directs the academy’s Cadet Life programs that include the JROTC, TAC Officer, Operations, Health Center, Transportation, Summer Programs and Cadet Activities. He fully embraces the strategies and teachings of single gender education and is a Gurian certified trainer.

A graduate of The Citadel, The Military College of South Carolina, Wayne served 30 years on active duty, serving in many operational and training assignments in Australia, the Far East, Iraq, Saudi Arabia, Guantanamo Bay, Puerto Rico, and throughout the U.S. His last duty station was Marine Corps Installations West at Camp Pendleton.

Wayne and his wife, Delilah, have two children and reside in Carlsbad.