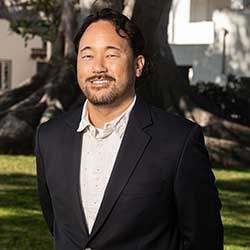 B.A. Fine Arts with an emphasis in painting, printmaking and photography, and a Minor in Communications – TV and Film, San Diego State University, San Diego, Calif.

Terry Matsuoka teaches Art and Photography at ANA as well as Mira Costa College. He has also taught English in Japan and the Czech Republic, as well as to foreign students in the United States.

Terry exhibits his own art and photography at galleries and events around San Diego.  He loves any opportunity to make things, be creative and express himself.  He has exhibited at San Diego State University, Little Italy ArtWalk, the San Diego Art Institute and Glashaus.

Terry also works as a professional musician. He performs as a solo singer/songwriter as well as with his band The Ingredients. He has released three solo albums and played at venues like the Viper Room, the Casbah and the House of Blues.

When he’s not pursuing his artistic endeavors or mentoring and teaching the young men at ANA, he plays soccer and softball weekly, hikes, bodyboards, skateboards and snowboards.  He is an avid Padres fan and concert-goer.