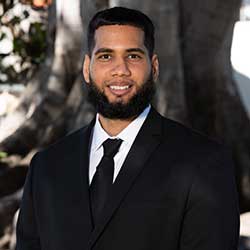 Rafael Rodriguez is an Army and Navy Academy alumni who graduated at the top of his graduating class and received the highest title in the Academy known as the Silver ‘A’ award. He earned his Bachelors of Arts in business with an emphasis in management while playing college basketball. He was a substitute teacher during the 2016-2017 school year at ANA while pursuing his Master’s in Education and Preliminary single subject teaching credential.

Currently, Rodriguez is the Spanish I and Spanish III teacher and the assistant basketball coach at Army and Navy Academy.  His love for teaching is astounding and he is constantly involved, helping students academically as well as athletically. What he enjoys the most about teaching and coaching is mentoring and helping his students out. It makes him reminisce about his experience at ANA when he was once a student here. He incorporates leadership into the classroom and all sports by setting an example to his students and athletes, as well as incorporating a firm work ethic.