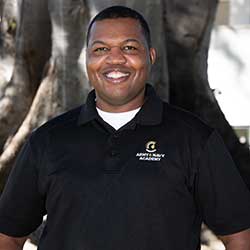 SSgt Paul Nixon, USMC Ret. is a native New Yorker, from Staten Island.  SSgt Nixon enlisted in the United States Marine Corps in September, 1998 and transferred to the Fleet Marine Reserve in 2015.  SSgt Nixon retired from the Marine Corps in 2018, after 20 years of services. He joined the Academy in 2016 and was assigned as the Middle School TAC Officer.

Staff Sergeant Nixon received his Bachelors of Science in Social Psychology from Park University, and a Masters of Science Administration in Leadership from Central Michigan University. He also holds an Administrative Credential in Educational Leadership, and is a Gurian Certified Trainer.

Staff Sergeant Nixon enjoys teaching and mentoring Cadets. In his free time, he likes spending time with his family, cooking, working out, and riding his motorcycle.