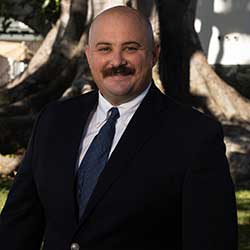 Nick Hall was born in Hemet, California and graduated from Hemet High School. He has resided in coastal San Diego since 2001.

He has been a faculty member at ANA since 2015. He is the Department Chair for the Social Science department.

Mr. Hall teaches US History 8, Geography 7, and AP European History here at Army and Navy Academy. He loves the learning environment at Army and Navy Academy, with its the small school atmosphere, focus on cross-curricular lessons, and kinesthetic teaching strategies. In addition to teaching, Mr. Hall is the co-advisor for the Model United Nations team and Harvard Model Congress, as well as the co-advisor for the Green Club.

Mr. Hall uses multiple boy friendly strategies in his classes, such as: Project Based Learning assignments with presentations, competition among students, integration of multimedia in the classroom, and group work in daily lessons.

He is passionate about surfing, hiking, music, vintage cars, playing guitar, watching documentary films, and of course, history. He enjoys spending time outdoors and doing anything in and around the ocean, with his favorite spots being Oceanside the reefs of Cardiff. He loves espresso, Italian cuisine, and hanging out with his Fiancé and their French Bulldog, Louie. He often travels to Italy to see his family that resides there.