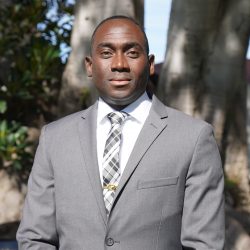 MSgt Lionel Saulsberry, USMC Ret. has worked for Army and Navy Academy since 2016. He currently serves a dual role as the Assistant Commandant for Cadet Life and the Admission Marketing Manager.

He served in Al Taqaddum, Iraq, as the Operations Chief for the Al Taqaddum Postal System. After his return from Iraq, he was assigned to the United States Merchant Marine Academy in Kings Point, New York, where he served as the Drill Master, an Assistant Marine Officer Instructor, and a Company Officer for the Regiment of Midshipmen. After a tour in Iwakuni, Japan, he returned to Camp Pendleton, CA.

Lionel has worked at Army and Navy Academy since retiring from the United States Marine Corps in 2017. He has two sons: Miles, age 20, and Noah, age 19.