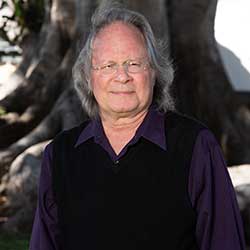 John has taught at the Academy since February of 1993. Born in Jacksonville, Florida, he has resided in California since 1965.

After graduating from Oceanside High School he pursued a career as a musician and songwriter, a pursuit that included a vocational course in recording engineering, recording sessions with artists such as Kenny Loggins, and a 1978 tour with Bo Diddley, Jerry Lee Lewis, and Hoyt Axton.

John began his formal musical education in 1978, and in 1982 graduated from UC Berkeley with a B.A. degree in music. Further musical pursuits included co-writing and performing the score to the 1987 Paramount motion picture, “Some Kind of Wonderful.”

In 1990 John earned a Master’s Degree in musical composition from San Diego State University, and in 1992, a California Teaching Credential. Before coming to ANA John taught music privately, and at Mira Costa College in Oceanside and with the San Marcos School District.

John teaches Music Technology and Guitar. He served as Bandmaster from 1993 to 2005, and has taught Music Appreciation, Journalism, Photography, Computer Applications, and Video Production. He has served as chairman of the Fine Arts Department since its inception in 1997.