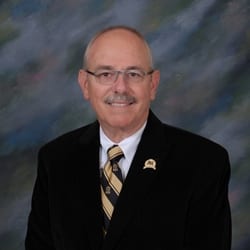 Past Chairman of the Board - Trustee

Jack was born and raised in Pasadena, California. He attended elementary school in Pasadena, and following the death of his father in 1956, attended junior high and high school at Army & Navy Academy.

During his 7 years as a “lifer” at the Academy, Jack was a member of the Eleventh Naval District

Champion Drill Platoon, and the Masque & Wig drama club; elected President of the Junior Class and Senior Class; served on both the Honor Council and Student Council; played Junior Varsity and Varsity Football and was Varsity Co-Captain in his Senior year; awarded the Silver “A” in his junior year; and served as Cadet Battalion Commander. As an Academy alumnus, Jack has also been awarded the Alumni Golden “A” for outstanding service to the Academy.

After graduation in 1963, Jack attended UCLA in the School of Engineering. Jack’s father was an engineer, so Jack followed in his “Dad’s footsteps”. Though an honor student in math and science throughout high school, Jack soon found himself focusing on playing UCLA football and enjoying the college “social scene”…neither was supportive of the difficult and demanding engineering study schedule. Jack eventually changed his major to Political Science and graduated from UCLA in 1968 with a Bachelors and Masters Degree in Political Science. Later while working for Southern California Edison, Jack would “bite his lip” and graduate with a Masters of Communication from USC. However, he still roots for the Bruins in sports events!!!

While at UCLA, the Vietnam War intensified, and Jack enlisted in the Navy Reserve, spending much of 1966 and the next 8 years in San Diego with deployments to the Pacific aboard

Destroyers, Aircraft Carriers, and the Battleship USS New Jersey. In 1974, Jack and was commissioned as an Ensign, and continued his Navy Reserve career over the next 27 years completing numerous shore and ship deployments including Desert Shield and Desert Storm.                     And, in 1995, he attained the rank of Captain. During 1999 and 2000 Jack served on special assignments to the Navy’s Chief of Information and Secretary of the Navy in Washington D.C., and retired at the Pentagon in August 2001.

In his civilian career, Jack joined the Southern California Edison Company in 1970 as a Management Trainee. During his 28 years with Edison, Jack held management, policy and strategic planning positions. He retired in 1999 as the Eastern Region Director responsible for Customer Service in Riverside, San Bernardino and Imperial Counties.

After retiring from Edison, Jack continued to be involved in the Inland Empire region; he was President of the Riverside Monday Morning Group (a group of business, educational and community leaders), Chairman of the Inland Empire Economic Partnership (a business economic development organization), a UC Riverside Foundation Board Trustee, and a founding Board member of Premier Service Bank in Riverside and Corona.

In 2000, Jack established Strategic Connections, Inc. The firm serves as a public utility advisor and liaison for the design and installation of utility services to its clients including: UC Riverside, City of Hope, Bear Valley Electric Service Company, the Burlington Northern & Santa Fe Railroad, and commercial development corporations.

Jack and his wife Mary live in Temescal Valley near their children and grandchildren, and spend their summers at their home in Seeley Lake, Montana.