Camp Challenge: Preparation for ANA and the Future 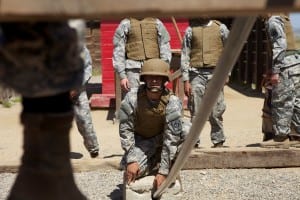 Army and Navy Academy is known for educating and developing good character in young men, so why not apply that same principle to the summer? In 2010, Camp Challenge was added to ANA Summer Program’s diverse lineup of uniquely focused summer camps.

Camp Challenge has proven to be a great introduction for potential Cadets into what life is like at the Academy during the school year. Who better to reinforce this than a young man who attended the camp and also successfully transitioned to life at the Academy?

Meet Tyler Beach, ANA Class of 2012. Here, he shares his insights on Camp Challenge and how it shaped his life today.

ANA: What are you currently up to?

ANA: What year did you attend Camp Challenge?

TB: I attended Camp Challenge the summer of 2010 going into my junior year of High School. I transferred to ANA that fall.

ANA: What would you say you took away from that experience?

TB: It is not your average summer camp – you will be challenged, which gives you a sense of pride and independence.

At first, I was out of my comfort zone and I didn’t know what to expect. I was assigned a roommate who I had never met before, and was on a campus I was not familiar with. Camp Challenge made me realize that I am capable of so much more than what I had been doing. I could what I was capable of achieving when I truly applied myself.

I finished that summer with higher self-esteem, life-long friendships, better relationships with my family, stronger leadership skills, and a more positive outlook on life.

ANA: What about your experience at Camp Challenge made you want to attend ANA?

TB: I knew the Academy was the right next step for me as soon as Camp Challenge ended. I had grown significantly as a Cadet and an individual, only being there for four weeks. In that short time, I had connected and shared a bond with the other 30 campers stronger than that of my friends who I’d grown up with – that’s what did it for me.

I liked the structure of Camp Challenge; it taught me how to organize and structure my own life. No longer was it about what friends you were hanging with, what parties to attend, or what you were going to wear the next day. I saw that Army and Navy Academy was my way to take control of my life where I would be given the opportunity to succeed in anything I wanted to do in the future.

ANA: What advice would you give to someone thinking about attending Camp Challenge?

I honestly consider attending the Camp Challenge Program one of the best decisions I have ever made. If I had not done that, there would have been no stepping stone into Army and Navy Academy, which helped me get into UCLA.

ANA: Where do you see yourself in 5 years?

TB: I’m currently studying Economics at UCLA. In 5 years, I hope to hold a solid job in investment banking.

I’m also following another passion of mine at the moment, taking an EMT course in order to work as an Emergency Medical Technician for UCLA EMS during my time in college. Between banking and pre-hospital care, I’m sure I’ll find what is right for me!